Despite being sold everywhere,  I seldom hav rice dumpling and roasted duck...Both of these are not my favourite but I have been eating since kid. The older generations considered these as 'luxurious' food in the past coz they only get to have this during festive days or special occasion (such as family gatherings).
Anyhow, rice dumpling are sold in the morning market daily (and even roadside) so they aren't as luxurious anymore. I even had one in the office when the HR manager bought some for us during the recent Duanwu Festival. 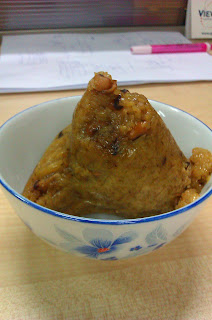 yea, that was my first time having rice dumpling bought by the company
*which explained why I snapped this pic, for remembrance!﻿ 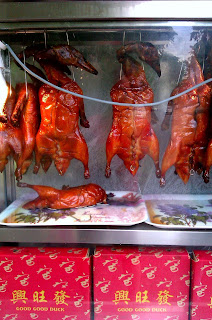 I can't remember when was the last time I tasted roasted duck until I see a new truck by the roadside, nearby my house. I guess it has been years and since we were craving for it, we bought half duck for dinner...*that was 2 months ago...I think I will have it again, if the truck is still there.
at September 02, 2015
Email ThisBlogThis!Share to TwitterShare to FacebookShare to Pinterest
Labels: Foods

Both also I like.. 'Harm yok jung' and siew ngap, who dont like wor.. I can eat 3 jungs and half a duck myself! Ngapppp!

Haha, go find the duck truck tonight lah, if still have, share half with me! XD

Princess Ribbon: yea, I tink I can eat half a duck too, jst need some time to chew.

RealGunners: tonight? I thought u back in Penang ardy?

Both dumplings and roast ducks are my favourite food. I can eat them anytime.

I love duck!!! The dumplings, I prefer the nyonya ones. These...so-so lah, don't mind eating sometimes.

Mun: anytime? let's have it for supper then ;-)

Suituapui: I seldom take the nyonya ones, usually took the conventional type.

My 8th dine out (after MCO) is with colleagues to celebrate one of the teammate's promotion. It was a weekday (Monday), thus the pl... 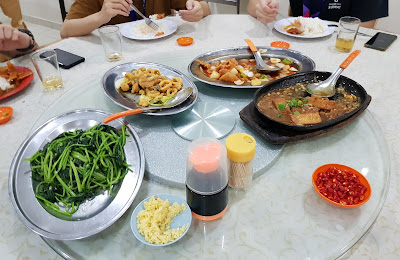