yea, u got it right!
December is the month where lotsa wishes pouring in...*hint *hint
a month to attend social functions, getting lotsa pressies, watching good TV shows...
also a month to enjoy great sales bargain!
at November 30, 2008 1 comment:
Email ThisBlogThis!Share to TwitterShare to FacebookShare to Pinterest
Labels: Personal

Counting Down to Christmas!

I'm already gettin' so much into X'mas mood nowadays. Been listening over to Yahoo Launchcast radio for Christmas classicals...and having the urge to go to malls jst to see those decors...as well as to feel the atmosphere!
sleigh ride...jingle bells...the Christmas song...let it snow...winter wonderland...
i miss Christmas @ Orchard Road...
wonder how isit like this yer'???

at November 30, 2008 2 comments:
Email ThisBlogThis!Share to TwitterShare to FacebookShare to Pinterest
Labels: Craps

Pressies, cupcakes, cupcakes, ice-cream, ballons...muffins...okay, no biscuits around. Coz they hav all been buried! RIP, 12000kg melamine tainted biscuits!
at November 18, 2008 2 comments:
Email ThisBlogThis!Share to TwitterShare to FacebookShare to Pinterest
Labels: Discovery

Quoted from The Korean Times:
"The state-run exam for college entrance will take place today. More than 588,000 students will take the College Scholastic Ability Test (CSAT) at nearly 1,000 exam venues across the nation from 8:40 a.m. to 6:05 p.m., according to the Ministry of Education, Science and Technology.
Measures will be taken nationwide to help students take the exams without hitches, including traffic control and the adjustment of business hours at offices. Workers at government offices and public firms across the nation, except Jeju Island, will be allowed to arrive at work by 10 a.m., an hour later than the usual 9 a.m. This measure is to prevent traffic jams in the early morning, so that test-takers can get to the exam venues in time.
Subway operators will increase the frequency of trains between 6 a.m. and 10 a.m. as will bus companies. To prevent traffic jams, parking will be banned within a 200-meter radius of venues.
The Civil Aviation Safety Authority will restrict aircraft operations near the exam sites so that noise will not disturb students during listening tests.
A total of 125 flights, both domestic and international, operated by national and foreign carriers will have their takeoff schedules altered between 8:35 a.m. and 8:58 a.m. and 1:05 p.m. and 1:35 p.m. Air travelers are required to check their flight schedule in advance."
Well, the Koreans concern alot on academics, much like the Chinese and Japanese do. How good if these were being practised during the time i sat for my Uni entrance exam? I dun have to wait for an hour plus for public bus to get home while memorizing the crappy Kreb cycle...blardy hell!
But again, don't u tink they r doin just a lil' too much over public examination? It's good to give some conveniences and less disturbance during the exam weeks, but going far to such extent could giv much pressure to the students...People around keep focusing on the students and their well-beings...Some might tink tht having this sort of 'emperor' treats might benefit the students, but i would tink otherwise. I may not be able to eat nor sleep well when everyone else kept assuming how well-prepared I am as all other things have been set up for my conveniences, rite? logic?
Anyhow, the younger kids r having their skool holidays now, meanwhile, the older kids r having their exams in these few weeks...here i m to wish them...

at November 18, 2008 2 comments:
Email ThisBlogThis!Share to TwitterShare to FacebookShare to Pinterest
Labels: Discovery

My liking towards junk snacks started since childhood days. All thanks to the 'keropok seller auntie' who used to sell all sorts of junk foods outside the school compound. I was in primary skool back then, and alwiz look forward to buy my fav 20-cent snack after the skool session ended. I consider it as a luxurious yet illegal item, coz mum forbid me to have those unhealthy snacks. Thus, i'l make sure to finish them before reaching home, otherwise hav to hide it in my bag! 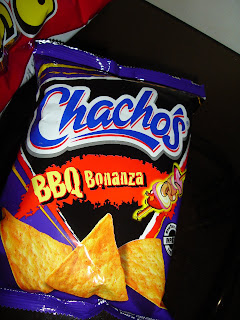 Recently, i have a junkie spree...Sis bought Chacho's which is our favorites! I heard that Pringles BBQ flavor has been recalled as they contained a carcinogenic additive. Do you think Chacho's will be affected too? 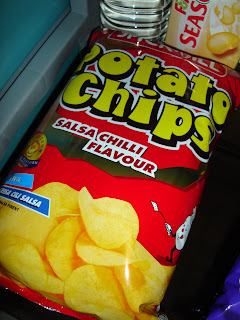 Jack&Jill potato chips!!! luv it so so so much! more than i luv Pringles...not sure why though! 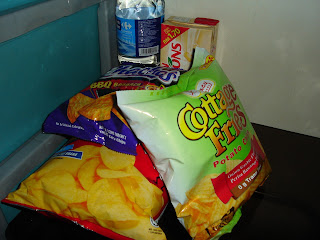 Of course, i like crinkle cut Cottage Fries too, coz it tasted like Ruffles, despite a cheaper version. Used to enjoy Ruffles alot, until I couldn't afford it. Thus, tis is an alternative option if u r looking for someting similar to Ruffles.
I guess my cravings for such snacks is so addictive tht i couldn't find a way to stop it...
at November 16, 2008 1 comment:
Email ThisBlogThis!Share to TwitterShare to FacebookShare to Pinterest
Labels: Foods 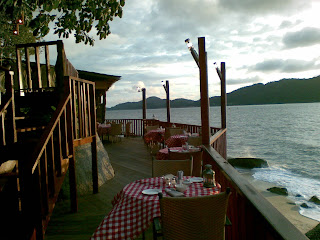 I wanna go to tis place!
I wanna smell sea breeze!
I wanna live a tranquil life!
I wanna dine at seaside!
I wanna escape from the city!

I'm falling in luv with this place...
Wh3re?
Lumut...
at November 15, 2008 4 comments:
Email ThisBlogThis!Share to TwitterShare to FacebookShare to Pinterest
Labels: Outing

Well, i m targeting 2010 as how Palin target on 2012. Not that i m running into a presidential election, but m hoping so much to be back on track by 2010. Been absent from blogging for abt 10 days, this duration had me battling with my own tsunami, and eventually i end up taking a risky decision. Negatively some may say risk = foolish decision, but in the other hand some may see it as an opportunity. Bless me in my new endeavor, o Lord!
at November 12, 2008 3 comments:
Email ThisBlogThis!Share to TwitterShare to FacebookShare to Pinterest
Labels: Personal

Lately i have a BIG appetite, and having the urge to eat in large quantity...Felt like stuffing myself with huge amount of food at one time, thus i drag sis to have chicken buffet @ Sunway despite the price has gone up. I dun k, hav been in famine for the past few days, and i wanna splurge on FOODS!
more pics here...
1st serving: Spicy & non-spicy fried chicken, crispy potato chips, fried lady finger, and a few pieces of fried fish 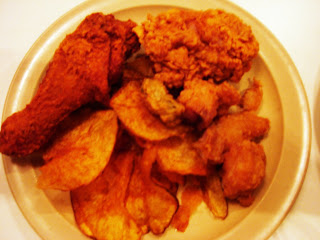 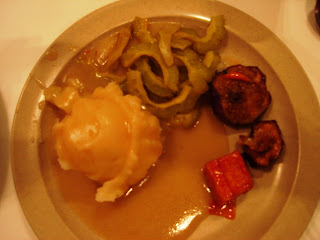 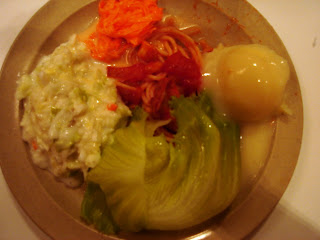 A closer shot on the fried stuffs 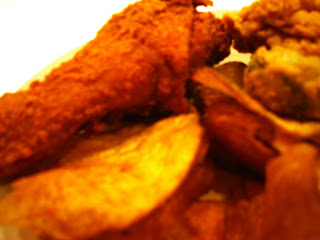 and on my 3rd servings 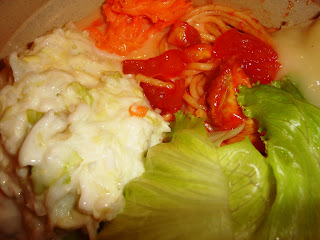 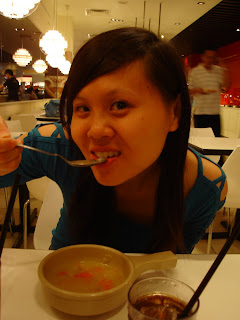 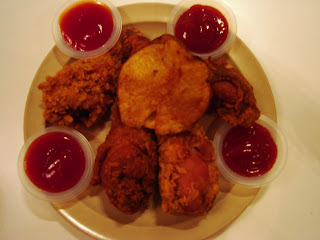 after: only bones left! dun belittle our abilities! 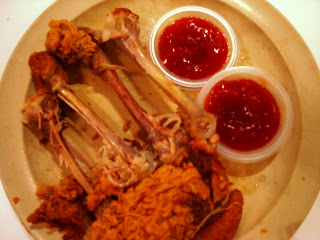 too full with chickens and fried stuffs, and i switched my focus on taking other pictures 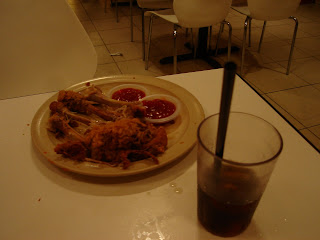 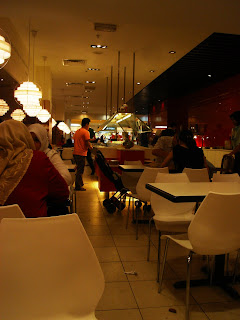 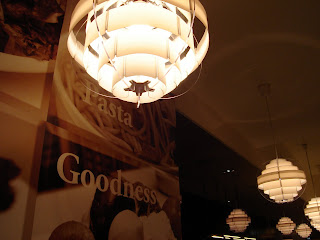 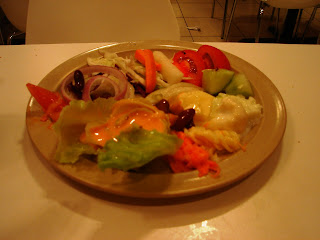 spicy chicken wings and baked potato...thumbs up for this coz it was yummylicious! 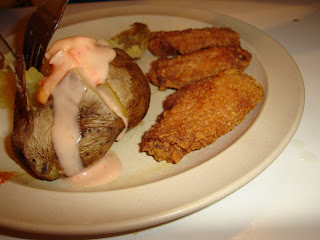 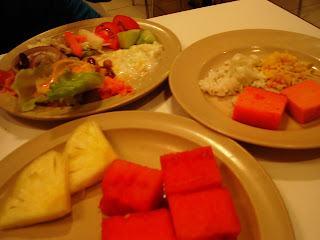 had a very hearty meal and a BIG tummy after that...guess this will be my last visit...
at November 02, 2008 5 comments:
Email ThisBlogThis!Share to TwitterShare to FacebookShare to Pinterest
Labels: Foods

Dad's b'day few days back, we bought him some cakes from Secret Recipe. We had the first round of prelude cakes on the weekend before his actual b'day. We chose 3 types of different flavor on the prelude round. Everyone seems to like the stinky durian cake so much. On his actual special day, i brought home the yummy durian durian cake! 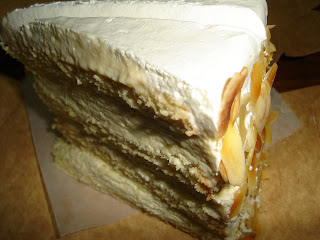 choc-dunno-what...looks good but too creamy for his consumption... 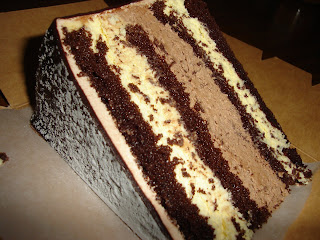 Went to the office on 1st Oct to collect my 'welcome back gift' aka 'safety return kit' from the company. I'm unofficial... 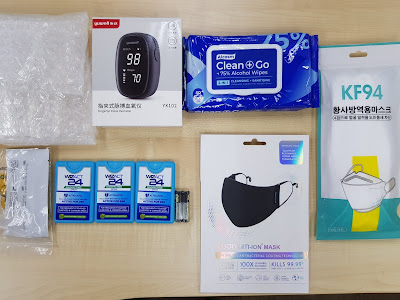