While many took leave on 31st Dec, yours truly is working on the very final day of 2015. Nope, I ain't workaholic but being around in the office with colleagues on new year's eve is kinda enjoyable after all!
To 'celebrate' our last working day of the year, we went out for lunch at Hong Kong Sheng Kee Dessert place @ IOI City. All other eateries were sort of crowded today, nevertheless we managed to get a table with ample seats and settled ourselves comfortably. This place is famous for its 'tong sui' (desserts/sweet soup), but of course they also served some mains apart from those 'tong sui'.
Here's what I ordered, the dry wonton noodles which came with five pieces of big & succulent wontons...yumzzz! 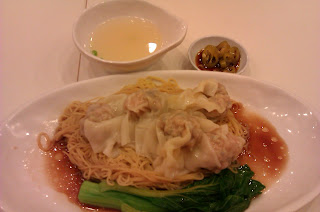 another colleague ordered a similar version but with the char siu (bbq pork)...
Another popular item in the menu is the 'mui choy' pork braised rice. Looks good but too much fatty layers. 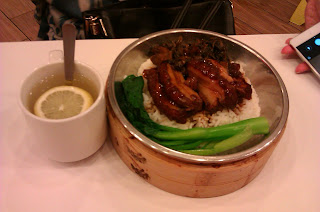 I have been craving for the mango pomelo sago dessert, and here's is it!
Pretty good too... 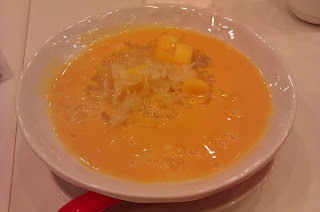 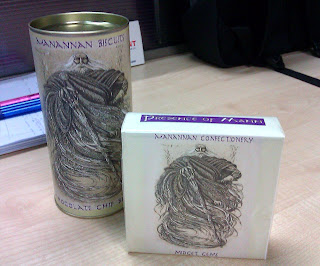 choc chip cookies and some-sort of sweets from Isle of Man ;-)
Well, I dun have sweet tooth, but I m happy receiving gifts from afar...
This would be my last post in 2015, till then Happy New Year 2016! 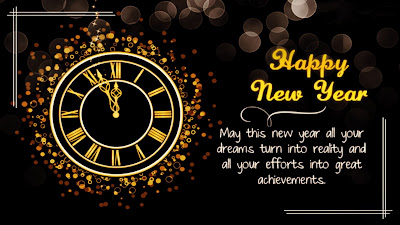 at December 31, 2015 6 comments:
Email ThisBlogThis!Share to TwitterShare to FacebookShare to Pinterest
Labels: Foods 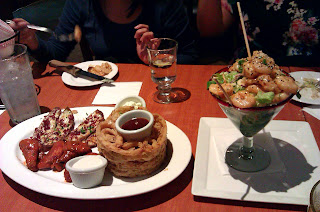 and we did not realize that they also served free flow of Baguette...hence the starter plus the Baguette itself were already filling, even when we only took abit of everything!﻿ 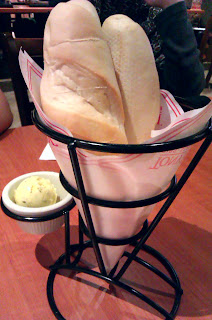 another colleague ordered Scissor Caesar Salad to be shared among us too...﻿ 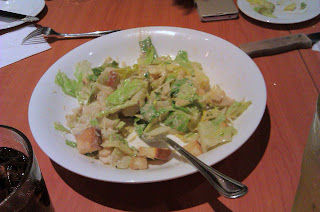 As for the main, I have always wanted to try their beef ribs, but this time I dun feel like taking beef, so this was what I've ordered, the Mojo Chicken served with fries.
Here's a description extracted from their website - Seasoned, grilled chicken breasts basted with Tony’s citrus and brown mustard mojo sauce.
But basically, it was jst a big slab of chicken breast with all those pineapples, capsicum, etc.
My Verdict: The chicken breast was slightly dry, hence it took me some time to chew and swallow that piece of 'dried meat'. 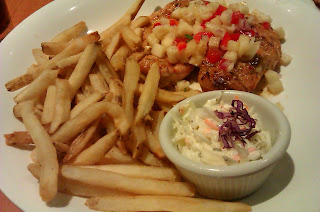 Their beef steak looks good too, although i did not try.﻿ 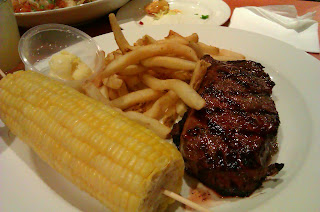 Huge food portion & a few of us have to 'tapau' our unfinished leftover to bring home.
Pricewise reasonable, ambience-wise - not bad, the place was crowded as usual.

Nope, this year I did not go malls-hopping to catch on the X'mas decorations...They are all pretty much the same with white/green/gold X'mas trees + blings blings...
Here's one I took on my way back from lunch... 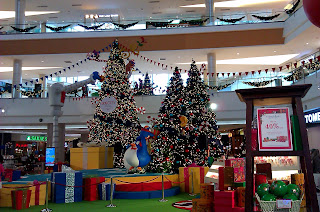 kinda disappointing huh?
Well, the X'mas trees seem 'small' and does not fill up the space at all. I would like to see a gigantic tall tree with lotsa 'blings blings' glittering and perhaps some booth selling candies, toys, X'mas decors around...The entire place does not have that kinda 'magical touch'!
The economy is so bad that many malls keep minimal effort and budget in their X'mas décor.
Come on, this is a huge mall and it is only a year old...with so many international franchise and big name outlets, why can't they put in more effort in getting the mall more attractive for the festive season? Not to mention it is nearby 5-star hotels and offices...sigh....﻿
at December 17, 2015 7 comments:
Email ThisBlogThis!Share to TwitterShare to FacebookShare to Pinterest
Labels: Outing

Some time ago I joined my colleague for lunch...It was a Friday and we went abit further for our fav Fish Head noodle at Serdang. Ever since 'Woo Pin' increased their price, I seldom hav Fish Head noodle...and this was my rare occasion of having one, despite a different stall. I ordered the fish paste noodles coz I lazy to chew fish bones. 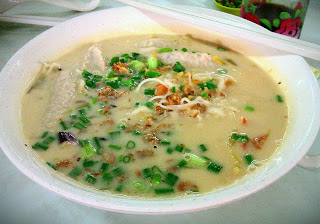 It used to be RM7 for a bowl (some years ago), now it costs RM9....Nevertheless it satisfied my cravings.
at December 15, 2015 10 comments:
Email ThisBlogThis!Share to TwitterShare to FacebookShare to Pinterest
Labels: Foods

My two days of training ended up with full knowledge stomach. We were fed to the brim with 3 meals a day - breakfast, lunch and teatime! 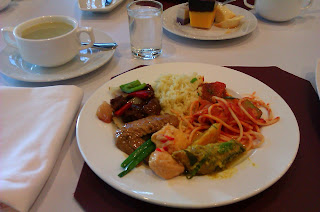 Breakfast & teatime were usually fried rice/noodles and simple kuihs, meanwhile our lunch was at the hotel cafeteria, and yea...buffet style.
This were what I had during my first day...Abit of everything...
Started up with a broccoli soup 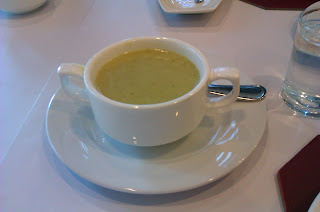 Then, my main meal consists of curry fish, dark soy sauce chicken, black pepper beef, bolognaise spaghetti, some rice, and veggies...I basically have no preferences and ended up with 'everything'!
The beef were hard...I can only chewed on it like some sort of chewing gum! 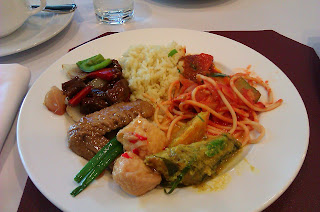 The below is my second helping...more greens and desserts...﻿ 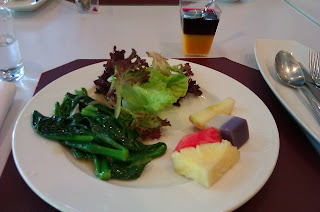 Food was so-so, nothing 'fabulous', choices were limited and dun expect of having various 'counters' like in those 5-star hotel. They dun even have ice-cream or ice kacang...
Second day was slightly better, in terms of food choices...despite that the beef still sucks.﻿ 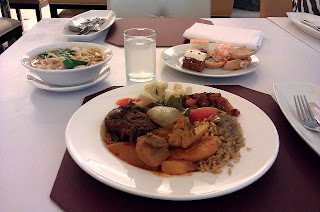 Tom yam noodle. Sourish but not spicy at all. There is no seafood in there, just fish balls and a few greens. 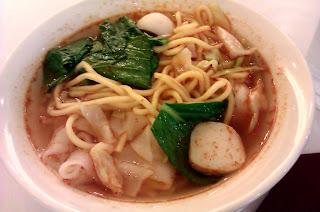 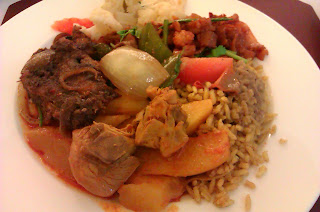 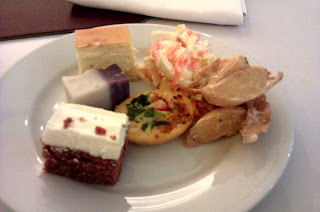 So, there goes my 2-days of overeating feasting.
at December 10, 2015 5 comments:
Email ThisBlogThis!Share to TwitterShare to FacebookShare to Pinterest
Labels: Foods

Today might not be a good day for those who take public transport in their daily commuting (for areas in Klang Valley). The fares rises drastically and it really hit hard on some of my colleagues & frens who depends on the public transport to work. Komuter, LRTs, Monorail and even ERL has its' fare gone up severely. Meanwhile those who are taking public buses would have confusion over the new route number and ended up missing their buses or took the wrong ones.
Thankfully I drive to work and petrol prices gone down by 10 cent/litre...Well, I wonder what the 'gahvermen' is up to these days?! encouraging more people to drive??? Year-end is 'ON' but instead of joyous mood, we were thrown with such 'surprise gift'...
Whatever it is, I'm quite surprise that my company still manages to send me (and my colleagues) for a short course...And yea, I took LRT to the training venue....*luckily I chosen to join the November session, otherwise I would have to fork out more in paying the LRT fares! 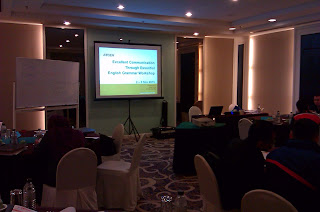 The venue (as u can see it from the title) is located next to the Titiwangsa LRT station. There were participants from various companies and I was basically alone as my other colleagues will be in different session.﻿ 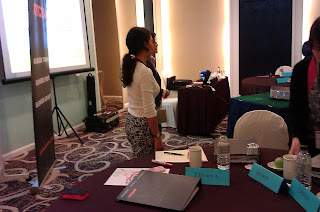 The hotel is kinda new but moderate in design, not sophisticated but still better than some run-down 5-star hotel in the city.﻿ 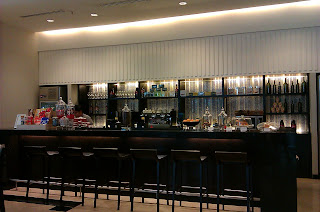 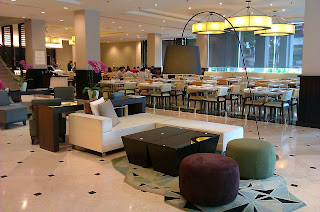 and my fav spot is this very glittering lift lobby 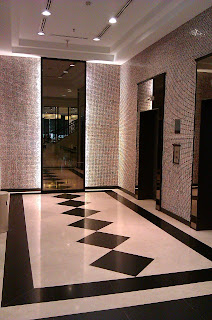 despite a few days' course, somehow I bumped into an ex-colleague who i have not met for 8 years.
Nope, not in my class, but next door...
Seems like this hotel is popular among training providers coz all seminar rooms seem to have occupied for trainings.﻿
at December 02, 2015 9 comments:
Email ThisBlogThis!Share to TwitterShare to FacebookShare to Pinterest
Labels: Foods
Newer Posts Older Posts Home
Subscribe to: Posts (Atom)

My first breakfast starts on Day 2 (coz Day 1 is check-in/arrival day). Was kinda lazy to get out of the bed coz it was a Sunday! Anyway, i ... 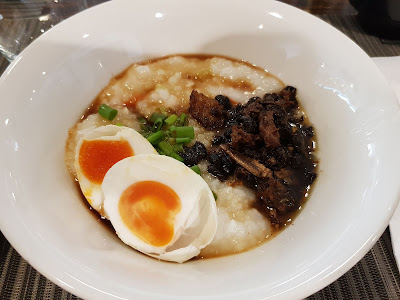