Mid Autumn festival wouldn’t complete without the presence of mooncakes and lanterns. I dun favour mooncake much except for Shanghainese mooncake, which is rarely seen these days. All these while, we had conventional mooncakes in the previous years (see blog post for 2008 & 2009), not even the snow skin. Nowadays, it has emerge with various flavours, fusion of eastern and western that sometimes dun suite my taste bud. 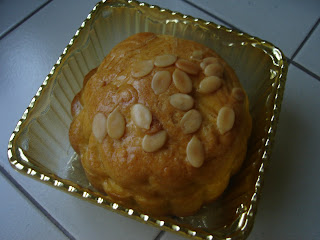 Shanghainese mooncake would alwiz  be my favourite.
Glad to be able to get one this year. 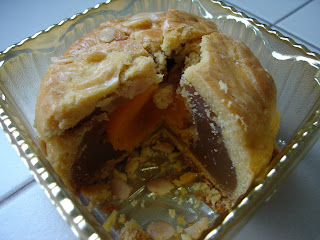 at September 21, 2010 No comments:
Email ThisBlogThis!Share to TwitterShare to FacebookShare to Pinterest
Labels: Foods

Recently i hav been following a blog, which is quite inspiring...in a way that the blogger expressed her thoughts in list. Being an organized person myself, i found that i’m kinda comfortable with it, at least for the time being.
So, here goes my list, things that are currently running in my mind.
1. I’m rather satisfied with how i fully utilized the long weekend. Not only tht i have updated my blog, but also went sight-seeing @ Mid Valley which hav been centuries since i last step my foot in it!
2. It was havoc in there during the public holiday. Their Raya decoration was awful (theme: flora) with plants looked deadly, but still crowds throng the main concourse to take pics.
3. I would prefer to take pics with those plants @ my garden.
4. Went shopping alone, finally! And bought myself ‘raya’ clothes...it’s never too late.
5. Bought a packet of seaweed snacks, some junkie which i fell in love with on the first-taste.
6. Had Big Mac and sundae.
7. Big Mac, when consumed once in a while, tastes HEAVENLY.
8. Talking about food, i had plenty during the past weeks.
9. First time patronising Star Village @ OUG. First-timer impression was that the place is too cold and dim, their concept is like Fullhouse. Food is so-so, but ambience is 5 star. Reason? Coz i like vintage stuffs decorating the entire place, with oldies playing @ the background. It’s like dining in the 50’s.
10. Of course, my food craving doesn’t end there, I had Louisiana Popeye’s chicken...someting which i last had about a year ago. It was still yummylicious as ever, their coleslaw and mashed potatoes were way much better than KFC, but the fried chicken is yet to be on par with White Castle.
11. FYI, White Castle no longer has outlets here. Miss’ em so mch!
12. Also, went to dai-pai-dong again for family dinner. No pics available coz i dun carry my camera around.
13. Just realized that i m off-topic. Back to the track now. Well, apart from all those foodie that i had, i also do house chores, during the long weekend.
14. And stroll around the neighbourhood, for a good less-than 10 minutes. Nothing to be proud of.
15. And cut my hair, by myself ;-)
16. Well, sis has since moved back to stay with us (as a family). And i’m all excited (mayb a lil’ thrilled) by her flamboyant party lifestyle, much like Paris Hilton.
17. Why? She could spend the whole day cruising the road to another state, yet came back being so energetic.
18. She got plenty of parties, event invitations, outing dates and trips to attend/decline. U knw, that kind of socialite, and her next destination is off to Paris. No joke!
19. How i wish to go there too on biz trip. Fingers crossed.
20. She is likened to Mary Jane (of Spiderman), dating one (or mayb 2, 3, 4?) guy at one time/after another. But anyhow, that’s none of my biz. But it gave me a heart attack when 2 guys almost bump into each other, and i gotta act quick to save her situation. Anyway, that’s the fun part of it.
21. So, good luck to her.
Pardon me for being too

at September 13, 2010 2 comments:
Email ThisBlogThis!Share to TwitterShare to FacebookShare to Pinterest
Labels: Personal 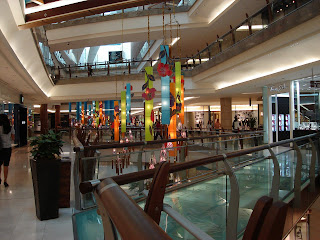 fascinated by the RaYa decor 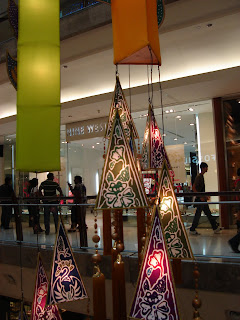 with sort of 'batik' pattern on the hanging ornaments 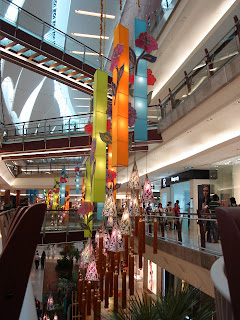 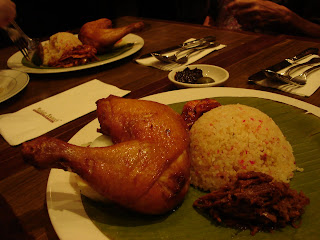 to fill our tummy, we had lunch @ madam Kwan's. It was a long queue due to the public holiday, but we dun hav to wait long to be seated, plus there were so mch to look-see around, and kept me entertained while waiting 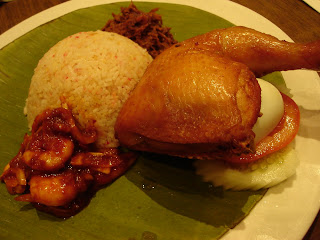 The food is so-so. Nothing to shout about, except their 'Bojari rice', which came with succulent sambal prawns, minced rendang beef, chicken thigh and some cucumbers and tomato... 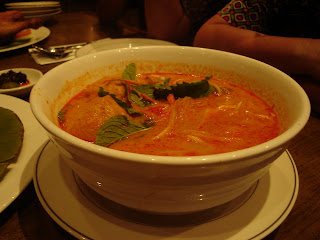 and we ordered curry nudles, a BIG BOWL shared by a few of us,
u can't see the what's in it, but it has chicken slices and prawns, another yummylicious sinful nudle!
at September 11, 2010 3 comments:
Email ThisBlogThis!Share to TwitterShare to FacebookShare to Pinterest
Labels: Outing

Writing encourages mind expression, so as claimed. While there have been plenty of stuffs running in my mind and the surrounding, i’m sort of retard for the inability of expressing them in words...verbally and in writing. Sad eh? Anyway, there hav been too much changes around that made me speechless. Changes @ home and @ work, many of those are inevitable. I need some time to blend in, to cope with the surrounding while having the ability to maintain my production level. And nope, it has not over yet, something ‘big’ is gonna happen, but not knowing what’s happenin’ is thrillin’ and scary. 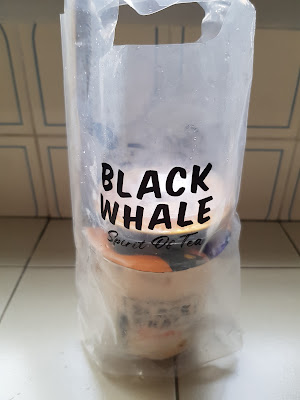